You are using an outdated browser. Please upgrade your browser or activate Google Chrome Frame to improve your experience.

Find an agent Calculate your LICI

This image may be subject to copyright.

New Bula Gold policy a perfect plan to take care of your future by getting periodical payments once every four years.

To know “What is in there for You” click here

ELIGIBILITY CONDITIONS AND OTHER RESTRICTIONS:

Death benefit includes payment of the basic sum assured to the nominee or legal heirs of the policy holder at any time during the policy term, provided the policy is in full force with all due premiums having been paid up to date. Whenever accident benefit rider is opted for, and death occurs due to accident an additional sum assured equal to basic sum assured will be paid as death benefit subject to certain conditions being fulfilled.

Auto-Cover facility: One of the exclusive features of the product is the provision of “auto cover” facility. If a policyholder has paid a minimum of two full years premiums and thereafter is unable to pay further premiums, the policy will not lapse. For a further period of three years from the date of first unpaid premium (FUP) full insurance cover will be provided and in the event of death during this three year “auto cover” period, sum assured less arrears of premium with interest up to the next policy anniversary will be paid to the nominee.

Funeral Expenses Benefit: An amount of 5% of the basic sum assured will be paid immediately on death of the policy holder to the nominee/legal heirs to meet funeral expenses on production of death certificate. This unique feature is over and above all other benefits described above. This benefit is available both during the original policy term and the extended term. For example on a $50,000 policy, the funeral expenses payment will be $2500.

All Information provided on this website is only illustrative and is subject to change.
Please contact your LICI Agent or LICI office for any further clarifications.

65 Years of Commitment and Trust 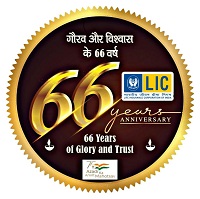